On or shortly after the death of Henry Parker in 1900, the decision was made to concentrate in the Lay’s Farm the agency of the Foley Estate and to let The Vine for private occupancy.  However, some time naturally elapsed before the first tenant could be found and assume residence.

This is clear from the 1901 Census return which shows that The Vine was, for a brief period, occupied only by Edward Fawke (who, as we have seen from Preb. Parker’s comments above, started to work at The Vine in the 70s as “gardener, groom, coachman and general factotum”) and his family.  The details are:-

It will be recalled that Preb. Parker had said that Edward Fawke married their housemaid Jane.  This was presumably Jane Davis shown as housemaid in the 1871 Census return.  If so, Jane must have died and Anne is presumably Edward’s second wife.  Edward and Anne were to enjoy a long married life.  Edward died in 1927, aged 81, and Anne the next year, aged 78.

The Fawke family did not enjoy their sole occupation of The Vine for long for probably in 1901 the first tenant took up residence and this was Mr Arthur Studer Zimmerman.

A.S. Zimmerman owned a silversmiths business in Birmingam with his brother John – known as A & J Zimmerman Silversmiths.  Arthur sold his share to his brother in 1918 and John sold the whole business in 1920 – just before the slump. Arthur S. appears to have moved to The Vine with his only son, Arthur Ulric, who had been born in 1889, and his housekeeper, Jessie Zoe Caldwell. Jessie Caldwell had been born in 1862 in nearby Pixley, her father being the bailiff at Canon Frome Court. She was therefore presumably recruited when the Zimmermans moved into The Vine

Arthur Studer’s wife, Edith, had died in 1894, aged just 34.  Arthur Ulric attended Hereford Cathedral School from 1902 to 1908.  He gained a research scholarship in engineering at Birmingham University but his studies were interrupted by the First World War, during which he served as a dispatch rider in France and Salonica.  Motoring and motor cycling (and, as we will see, shooting) remained one of his major interests and hobbies during his life.

A propos of shooting, a very tragic event occurred at The Vine in August 1907.  In the course of trying to shoot a rat in one of the Vine outbuildings, Arthur Studor wounded his groom/gardener Francis Caffell in the leg, and the poor man died of the wound a day or so later.  Francis apparently lived at what was described as the Estate Office Cottage, now Vine Cottage and Heritage Cottage, and had worked for Zimmerman for four and a half years. It is doubly tragic that the dead man’s brother, William Caffell, who gave evidence at the inquest, was shortly himself to die in the Great War.  At the inquest, Arthur Studor promised “to do what he could to provide” for Francis’s wife and family, as was of course only just.  Certainly the 1911 Census shows “Harriet Elizer Caffelle [sic], Widow, 42” still in residence at the Estate Office with her children Cyril Francis, 7 and 4.

The Zimmermans appear to have also owned one or more “tied” cottages in the village.  As we will see below, one was on the Tarrington Common road and subsequently lived in by the Deem family.  It may have been this cottage, or another one unidentified, that Arthurs Studor let to a family of Belgian refugees in 1914.  The Parish magazine for October 1914 records that the cottage was “furnished from the Rectory with the assistance of Miss Caldwell who has been very thoughtful in providing things necessary”.  The family included Alois Guldentops who shortly thereafter joined the Belgian Army and was killed in the War.  His name appears on the village War Memorial.

From these years of the early 20th century, we have the first photographs of the house and its inhabitants.  There are two fine photographs, of the South front of the house, very much as it presently is – save for the single ground floor window and door to its right  and a glass-roofed porch between the two shallow wings (the marks of which are still visible on the side of the S.E. wing).

Two views of the South Front of the house, early 20th Century

There are also two photographs  taken in front of the outside South wall of the front garden and some of the outbuildings, of the Tarrington and Stoke Edith Rifle Club – it seems that Arthur Ulric was a keen, and good, marksman. One of these is a photograph (thought to date from 1912) of the Club (including Arthur Ulric) proudly displaying the Hereford Times Bowl, which they had just won. 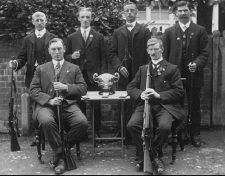 The 1911 Census gives us the following living at the house:-

There is something of mystery and possibly romance about the appearance at The Vine of the servant Bessie Dora Tabb.  Her granddaughter, Cheryl Booton, has researched her grandmother’s life and has presented it in the form of a novel “A Life Worth Living: A Tale Worth Telling” (2018). Born, as the Census tells us, in Cornwall, she moved to Herefordshire where her father came in search of farm work with his large family. Though she claimed to be 21 at the time of the Census, she was in fact just 16.  In 1917 she gave birth to a daughter in Upton on Severn.  She presumably had left The Vine then or immediately thereafter.  She is next found working in a hospital in King’s Street, Birmingham close to the Zimmermans’ house and business there!  The father of the child was never recognized.  It is tempting to suggest the young Arthur Ulric but of course it could just as well have been a local lad.  If however the Zimmermans had some hand in finding the job for Bessie Dora in King’s Street, this would seem to indicate some feeling of responsibility for her.  We shall never know.

With no longer the benefit of the Census returns, the best check for the inhabitants of a house at a particular date becomes the Electoral Roll – although this only of course lists those eligible to vote – ie not minors or (before 1918) women. Up to 1928 the only electors resident at The Vine seem to have been the Zimmerman father and (when he achieved majority in 1910) son, although we know that the housekeeper, Jessie Caldwell, had moved into the house with the Zimmermans in 1901  and that there were two other female servants in the house in 1911.  In 1929, Arthur Studer disappears from the Roll, and indeed Kelly’s Directory for that year lists Arthur Ulric only as in occupation. Arthur Studer had died, at The Vine, on 24 November 1928. His burial is not recorded in the Parish Register but, with his Birmingham roots, it is perhaps more likely that he was buried or cremated there (or indeed in Hereford, as his son was to be). By a Will of 17 April 1916, and a Codicil of 10 June 1926, Arthur Studer left to Jessie Caldwell (described in the Will as “for many years my valued friend”) a legacy of £300 and an annuity of £260 pa. It seems therefore that Arthur Studer’s relationship with Jessie Caldwell went beyond that of employer and housekeeper. The balance of the estate went to Arthur Ulric.

The Electoral Roll for 1929 does however contain one new name for The Vine – Clara Whiting. Jessica Zoe Caldwell is also recorded on the Roll for The Vine but it seems that she left shortly after Arthur Studer’s death. It may be that at this stage Clara Whiting took over as housekeeper (as we shall see, she was certainly the housekeeper at a later date). Although Clara appears on the Roll for the first time in this year, this does not necessarily mean that she had just arrived in the house. It was only in 1928 that the suffrage for women was extended beyond certain restricted categories (eg married women or female house-holders) to all women over 21. Therefore it may be that Clara had been in the household at The Vine from some date after 1911.

Arthur Ulric’s shooting interests clearly continued until after the War, as there is a further photograph of him, now clearly a man in his 70s or 80s,sitting surrounded by the then members of the Tarrington Rifle Club and displaying a number of impressive-looking trophies won at the 1958 Herefordshire County Meeting. 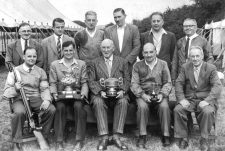 Success at the 1958 Herefordshire County Meeting

In 1946 Edwin (“Ted”) Deem started as Head Gardener at The Vine. He had moved to Tarrington that year and lived at 26 Tarrington Common (now known as “Seagers” and where his son Robert still lives). This cottage was a tied-cottage to The Vine and was provided to Ted Deem free of rent. Ted was full-time at The Vine till the death of Arthur Ulric in 1963, assisted by a series of boys – Geoff Rose, Bernard Smith, Roy Pagett and Gordon Groves.

Robert Deem was born in 1947 and at 5 attended the St. Philip and St. James Church School – now the Lady Emily Community Centre – just down the lane from The Vine. Very commonly he would call in at The Vine after school to help his father in the garden, and occasionally round the house. He remembers Arthur Ulric as a friendly but shy person, who was seldom seen outside the house but took perhaps two, rather ponderous, walks round the garden each day. He was very keen on radios, clocks and electric gadgets. Also motoring – and he kept a succession of large Daimler cars (in one of which Robert remembers Arthur Ulric driving Robert’s small sister to Bromsgrove Hospital for an emergency operation). These were kept in one of the barns facing the drive between the house and Vine/Heritage Cottages.

Robert Deem remembers also Clara Whiting, the housekeeper, as rather stern and well-rounded! Also Mrs Folkes, the cook, who was a much more cheerful and friendly lady.

At this time, what is now the paddock to the house was still an orchard (though seemingly not also rented by the Zimmermans).  Arthur Ulric took pride in his vegetables and flowers, often exhibiting them at local shows.

Arthur Ulric proved a very loyal Old Boy to Hereford Cathedral School. He was active in the Old Boys’ association and was President at the time of his death. He had apparently donated generously to the New Laboratories, the Gymnasium and Library at the School and, actually the day before he died, donated £14,000 to build a new dining hall and kitchens there. The School, as a result, has a “Zimmerman Building” among its facilities.

Arthur Ulric died in 1963 and, subject to a life interest to his cook and housekeeper (Clara Whiting and Florence Folkes), who as we have seen had been with him for many years (in Clara’s case at least 34 – probably more), he left his entire fortune to the Old Herefordian Club, to be used for the benefit of the School. His funeral service at the Crematorium was conducted by the Vicar of Tarrington, assisted by the Dean. A memorial service was held in the Lady Chapel of the Cathedral.

Not surprisingly, the obituary to Arthur Ulric that appeared in The Herefordian (the Old Boys’ magazine) was full of his praises and there are some rather touching paragraphs:-

“He was not an easy man to know – always shy and retiring, he took no part in public life; he preferred to remain in the background. Of his many acts of kindness little was publicly known but there are many who will remember with lasting gratitude his unfailing thoughtfulness and generosity…….We will all miss his tall, kindly presence at School and Old Boy functions – preferring always to be rather on the fringe than at the centre of things, but always so courteous and friendly to old and young alike.”

Certainly the photographs that survive of Arthur Ulric (particularly two early ones,  one with presumably his father, taken when he was about 15, and the other when he was perhaps 18, seated with contemplative expression and book in hand) show a shy and rather sensitive, studious character. 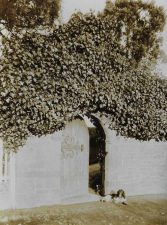 Spaniel beside the Medieval Door in the Vine Wall