At some stage in the early 17th century the Careles/Carles family, or at least one branch of it, seems to have intermarried or merged in some way with the Norbury family. The first trace of this in the Parish Register is the entry for 11 October 1617 of the baptism of “Thomas, son of Roger Caroles alias Norbury”. On 10 November 1628, Elizabeth, daughter of Robert Norbury was baptized. In 1631, Roger “son of Thomas Caroles, alias Norbury” was baptized. On 14 August 1636 “Susanna, daughter of Robert Carles [or Carlos, the reading is not clear] alias Norbury” was baptized.

Then on 16 February 1639 we pick up again the trail of occupiers of The Vine with the entry in the Register of the baptism of “Anne daughter of Robert Norbury dela Vine” – perhaps the same Robert Carles/Carlos alias Norbury whose daughter Susanna we have just seen baptized three years before (and even possibly the same as the Robert Norbury of 1628). What relation this Robert was to Thomas Careles is impossible to say. No sons of Thomas Careles named Robert appear in the Register. A Robert, son of Robert Careles, was baptized in 1621 but he would be very young to father a child in 1636 and certainly too young to do so in 1628! It is possible that Robert Norbury dela Vine was a nephew or other collateral of Thomas Careles, perhaps by the marriage of a Careles bride to a Norbury groom, and that he inherited The Vine on Thomas’s death in default of nearer surviving issue.

In any event, if Robert Norbury’s first three children were indeed the daughters Elizabeth, Susanna and Anne, he may have been gratified that on 10 September 1642 (just three weeks after King Charles I raised his standard at Nottingham to start the Civil War), the Parish Register records the baptism of “John, son of Robert Norbury de la Vine”. On 5 May 1647 a further son, Robert, followed, on 10 August 1655, another daughter, Joane, and in 1658 a further daughter, Jane.

It may be that, at some time after 1642, The Vine passed back into the hands of the Careles main line (if it ever left it). This is because we have a Deed of Quit Claim dated 29 October 1677 (see below) under which one Thomas Careles “the younger”, described as the “sonn and apparent heyre of Thomas Careles the elder now or late of Little Taddington in the parish of Taddington al(ia)s Tarrington in the county of Hereford gen(tleman)” releases, acquits, discharges etc William Hopkins and his wife Mary from all claims, rights, title etc which he the said Thomas Careles has or may at any time hereafter have in and to The Vine now inhabited by the said William Hopkins. All for the sum of “ffive shillings of lawfull English money”. We will read much more of William Hopkins and Mary his wife below but it is clear that, by 1677, the house had passed out of the occupation of the Careles/Norbury line and into that of William Hopkins. The implication of the Deed is that Hopkins had bought the house from Thomas Careles the elder (though this does not necessarily follow). If so, this looks like the Thomas Careles who was born in 1617. As we have said however, there is no trace of his son Thomas Careles the younger in the Parish records. 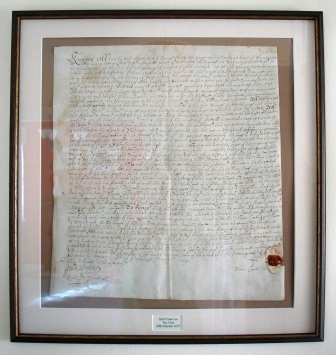 The Deed also specifies that the release, acquittal, discharge etc specifically operates with regard to “those two severall p(ar)cells of arable land lying in the North part of a field called the Lower field in the said parish of Taddington al(ia)s Tarrington both p(ar)cells containing about three acres being lately purchased by the said William Hopkins p(ar)tie hereto from the said Thomas Careles thelder [sic] and mee the said Thomas the yong(er)” and more particularly described in a conveyance dated 28 December 1674. In 1674 then Thomas Careles the elder was still alive.

As to when exactly this sale to William Hopkins took place we have no certain evidence. The Deed of Quit Claim refers to “certaine Indentures of setlem(en)t “ dated 28 January 1669 between Thomas Careles the elder, Thomas Careles the younger, one John Rickards and Olive his wife and Mary, now wife of William Hopkins, all on the one part and William Hopkins on the other part. This may be the deed of sale of the house though, if so, why the other parties than the two Careles’s were involved in the sale is a mystery.

Before leaving the Quit Claim Deed of 1677, it is worth noting two curious aspects of it. Firstly that, although described therein as a gentleman, Thomas Careles the younger clearly could not write – he signs his name with a “T” at the bottom right of the Deed. William Hopkins could however as his, quite fine, signature appears at the bottom left. The second curiosity of the Deed is how it has come to light. Unlike several other Vine deeds which are held in the Foley archives, this one was acquired at a car-boot sale in Stafford some time in the 1990s! One wonders how it got there. In any event, it is now safely back in The Vine.

Although the connection between the Carles/Careles/Carlos family and The Vine seems to have come to an end at this time, the family remains much in evidence in the Parish records, right up to the 19th century. In the Church graveyard are memorials to Thomas Carless (born Hereford 1808, died 1858) and his wife Anne and daughter of the same name. Also to Joseph Carless of Aylestone Hill, Hereford who was born in 1806 and died in 1897. This Joseph was apparently an Alderman of the City of Hereford and Mayor in 1861. Several Carlesses appear in the 2004/5 Hereford Telephone Book in Ledbury, Colwall and Castle Frome.