The First Evidence of the House and its Occupiers –

Schedule of the “Rents of the Lands ….. paid to Roger Bodenham of Rotherwas Esquire – 1587″

The first definite evidence for the existence of  The Vine and the identity of its occupiers is a schedule of the “Rents of the Lands and Tenements as well of Free Tenants as others, which are yearly paid to Roger Bodenham of Rotherwas Esquire – 1587” (which is actually a translation from the original Latin  carried out by one John Caley, of Gray’s Inn, on what appears to be 10 March 1800).

Roger Bodenham was clearly the Lord of the Manor of Tarrington at this date. He appears in fact to have been the last of the Bodenham Lords of the Manor, as his daughter Blanch married Edward Lingen in 1611 and the Lordship thus passed into the Lingen line.

In any event, on this unspecified date in 1587, as England braced herself for the onslaught of the Spanish Armada, a number of the villagers of Tarrington are listed with the amount of their rents payable to the Lord of the Manor. They include one “Thos.Careles of the Veyne”, paying 6s 8d per year. Also appearing are John Godshall [sic], John Hodges “of le Pole end”, Thomas Hodges, another John Hodges, William Careles and Thomas Careles (presumably a different Thomas from the first mentioned). 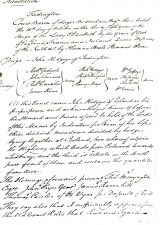 “Thomas Careles of the Vyne” re-appears soon after this, in the records of a Meeting of the Court Baron of Roger Bodenham held in “Tadington” on 18 October 1593 (again in John Caley’s translation). Here he is cited for “Default of Suit” (failure to appear at, presumably, a previous meeting of the Court Baron). Also mentioned in the document are “John Hodgeys [sic] of Tadington” who “essoigned” (apologised for non-appearance), “Rob. Godsale”, Robert Careles, “Rob Hodgys”, “Thos. Careles of Sewards” (again presumably a different person from Thomas of “the Vyne”) and Wm Careles.

As is clear from just these two documents, the Careles family was fairly prolific in Tarrington at this time. The Parish Records of the Church of St. Philip and St. James at Tarrington commence on 28 March 1561 and only the fifth entry records the baptism of Catherine, the daughter of Thomas Carles [sic]. As we will see, the family name is spelled in a variety of ways in the documents, Careles, Caroles, Carles, Carlis, Carlos and even Carilesse. This is of course not uncommon with surnames in this period. It will be recalled that the family name of Thomas Careles’s contemporary, William Shakespeare, is found variously as Shakspere, Shakspeare, Shaxpcre and Schackspere! This Thomas, who became the father of Catherine in 1561, may have been the occupier of The Vine recorded in the documents of 1587 and 1591. Another Thomas, son of John Carlos, was baptised in the church in 1578 but he will have been too young to be the Thomas of the 1587/1591 documents.

During the years from 1561 to 1636, there are 28 references to members of this family in the Parish Register. In 1602 Thomas Carles signed the Parish Register as “Gardiani” (presumably a church-warden of sorts). His relation John Carles had fulfilled the same function in 1603 and 1607.

How long Thomas Careles/Carles – or his family before him – had lived at The Vine is unknown. As has been noted, the Parish Register commences only in 1561 and tracing the lives of Tarrington villagers before that date is very difficult. However, it is clear that, at the moment that the Register opens to us the world of Tarrington, the Careles family was already very extensive and it must be likely therefore that they had been settled for some years in the village by that date. Whether they, or a branch of the family, had also been in occupation of The Vine for some time is obviously impossible to say – though it is nice to think of some Thomas or John or Roger or Richard (which seem the most common family names) Careles or Carles erecting in the late 15th century the simple yeoman’s dwelling which now comprises our Breakfast Room and Library!

Thomas Careles died in 1627. The Parish Register for this year records “Thomas Carelos of ye Vine” as being buried that year. What was the form and extent of the house, plus adjoining farmland, at the time of his death is unknown. However, the fact that Thomas was referred to consistently in the documents as “of the Vine” would seem to indicate that, by then at least, the house/farm was a prominent or at least distinguishable one in the Parish – perhaps by now more than the simple yeoman’s dwelling that it may first have been.