John Stuart Mason was succeeded at The Vine as Steward by Henry Parker. Henry Parker was the father of Prebendary Thomas Parker and some interesting snippets of information about life at The Vine in the second half of the 19th century are contained in the “Notes”.

Henry Parker (see Plate 8) was apparently born on 1 January 1817 in Lincolnshire. He started as a farmer in Yorkshire but then moved into estate management for large landowners. From 1852 till 1867 he was the Agent for Sir Tatton Sykes Bt. On 1 January 1868, his 51st birthday, he started as Steward for Lady Emily Foley and moved with his family into The Vine. At that time the family was already fairly large, consisting of Henry’s wife Elizabeth, his daughters Elizabeth Annie (born in 1858), Mary Ellen (born 1860) and Alice (born 1864), and sons Thomas (the later Prebendary, born in 1862) and a new baby, Richard Ernest, born just the previous year. It seems likely that they also brought with them from Yorkshire the children’s Governess, Clara Marshall. 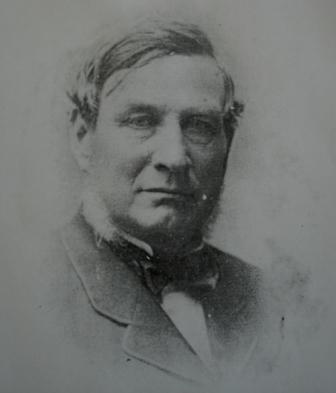 According to the “Notes”, the terms of Henry Parker’s employment were:-

“…a salary of £450 with the Vine at Tarrington, and its premises, orchards and meadow thrown in. He might have had the hopyard, along the station road as well, and the kilns with their swinging hoods were in his yard; but he knew nothing at first of hop growing, so he let that go to the Leys Farm. In his orchard were many varieties of apples and pears, and in his garden he found a pear tree bearing a large yellow pear, a brown russetty and a bergamot.”

In 1869 the family received the addition of a further son, Herbert John, who was baptized in Tarrington Church on 21 September of that year.

In 1871 we again have the great benefit of the Census returns. That for The Vine is as follows:-

A few years after the 1871 Census, in 1874, a further daughter, Edith, was born to Henry and Elizabeth – bringing the family to the respectable total of four daughters and three sons.  As they grew up, The Vine must have seemed quite crowded at times – especially as the Governess, Nurse, Cook and Housemaid all presumably lived in also.

In 1874 also we have an insight into two areas of Henry’s duties as Steward.  Like Charles Mason before him, he continued implementing the Foley policy of acquisition on Tarrington Common and in this year purchased at auction two cottages there for the Estate. The second area is in connection with a long-running dispute between the Foley Estate and the Hopton Estate for the right of Lordship of the Manor of Tarrington – still obviously considered a matter of aristocratic pride.  In this year we find Henry sending out summonses and grumbling about problems finding suitable candidates to constitute a Manor Court of Homage to support the Foley claims.

The “Notes” give us a little information on life at The Vine at this time:-

“Edward Fawke, known to us at the beginning as the young man from the Foley Arms, was gardener, groom, coachman and general factotum at the Vine from the 70s.  He married Jane, our housemaid, and they lived at first in a thatched cottage up Church back lane; and had some very nice children, and a bush of “old man” in the garden”.

“I can remember Mrs Hill from the Common coming to wash at The Vine in the old days, say in 1875.  A gaunt woman, rather like Mrs Squeers, and vigorous.  In her softer moods she was known to speak of her husband Thomas Hill, a painter, and mild.  “H” she said, “Thomas Hill has been a good man to me.  Never said a hard word scarcely, and never laid a hand on me.  My word” she added (or do I imagine it), “I’d have given him something if he had””.

In January 1881 Henry’s wife Elizabeth died, aged 50 – she was buried in Tarrington Churchyard on the 22nd of that month.  The Census for that year reflects quite a few other changes in the household:-

The sons Thomas and Richard were presumably away at school by this time. The third daughter, Alice, by now has embarked on quite a remarkable career.  The 1881 census shows her at 6 Upper Baker St. London and describes her as a scholar living with a headmistress of a Church of England school.  In 882 she went up to Newnham College, Cambridge (which had been founded as an all-female college only in 1871) to read History.  After teaching in London, in 1888 she moved to Japan as a missionary.  It is interesting that the second daughter Mary Ellen is acting as Governess and “Secretary” (this latter a very modern term for the times) – presumably in the household.

It is interesting also that the land attached to The Vine had shrunk to only 18 acres, compared with the fairly extensive lands so attached at the time of the 1838 Tithe Apportionment. One must assume that land had been re-allocated to Lays Farm, where the 1881 Census shows Samuel Cot [sic – in the 1891 Census the name is given as “Cox”] in occupation as “Farm Bailiff of 415 acres”.

An 1885 map of the village shows the disposition of buildings round The Vine exactly as they presently are – including the present Vine Cottage and Heritage Cottage, which were then the Estate Office and Accounts. 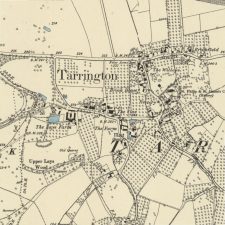 By the time of the 1891 Census, the household had contracted further. Only 5 persons are recorded living in the house – as against 12 in the 1871 Census. They are:-

We know that the eldest daughter, Elizabeth Annie, had died in 1888 (at only 30). Poor Mary Ellen now looks as though she has been assigned the role of spinster housekeeper to her widower father. Young Herbert is perhaps preparing for the possibility that, as with the Edwards and Mason families before him, he may succeed to the Foley Agency after his father’s death. If so, it was not to be, though he did pursue his career a a land agent in Yorkshire. Richard had moved to  Queensland, Australia, in 1885 but his life there seems not to have been happy as he committed suicide there in 1893 aged just 26.  At this time Alice was still in Japan as a missionary.

Meanwhile, back to Thomas, Prebentary, Parker. We know that, presumably some time in the early 70s, he went to the Cathedral School in Hereford and was ordained in 1885. His childhood at The Vine, among the apple orchards and lush meadows of the Frome valley, clearly left him with a love of horticulture that lasted all his long life. After curacies and incumbencies outside the County, he came to Breinton as vicar in 1932 and remained there till his retirement in 1938 when he went to live at Vineyard Croft in Hereford. There he grew apples, of which he was apparently a connoisseur. He died in 1965 – at the age of 103 – at which time he was the oldest clergyman in Britain!

Preb. Parker had married Jessie Humphries in 1902, but she died in 1916 and then married Caroline Masefield in 1929, the poet John Masefield’s sister. She herself was a noteworthy personality, having received violin lessons from Edward Elgar, when she lived in Tupsley and before Elgar’s rise to fame, and also having played in the orchestra whose performances of his own music were broadcast to the great man on his death bed.

Alice had had a break from her Japanese missionary work, since the 1901 census shows here living at 8 St Owens St, Hereford but soon after that she returned to Japan and only retired from such work in 1929.

Henry Parker’s life was not quite as long as his eldest son’s, but of quite impressive duration nonetheless. He died at The Vine on 25 September 1900, aged 83. There is a tombstone for Henry, his wife, Elizabeth Annie and Richard Ernest in Tarrington Church graveyard.  Inscriptions on the side of the plinth record the death of Herbert aged 77 in 1946 and Alice in 1953 (when she will have been 89)